Process flow:
As shown in the figure: Volatile organic gas from the loading process enters one of the activated carbon beds A through the gas gathering pipeline. The VOCs in the organic gas are adsorbed by the carbon bed, and the target gas is discharged into the atmosphere through the vent line. 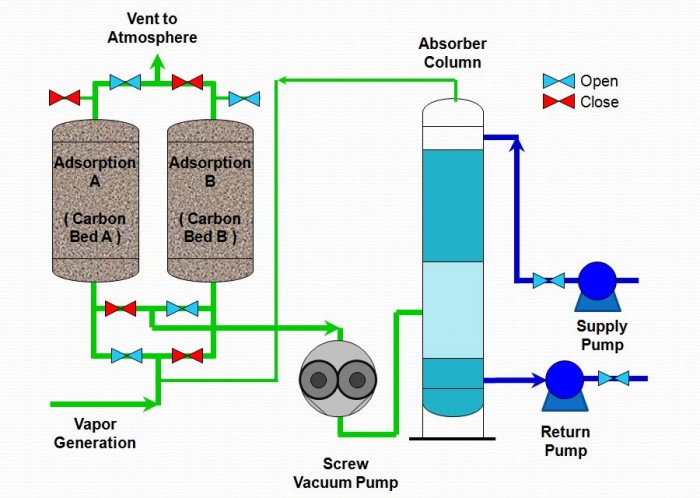 When the carbon bed A is adsorbed to the set value, the apparatus automatically switches to another carbon bed B for adsorption, at which time the carbon bed A is regenerated. First, the establishment of the petrol cycle, while starting the vacuum pump, vacuum pump speed according to the pressure before the pump control, activated carbon bed will regenerate for some time, when the vacuum continues to decrease, purging solenoid valve open, inhaled clean air to more hydrocarbons from Carbon bed desorption down, the end of the purge, open the vent valve to restore the carbon bed pressure. At this time, the adsorption-regeneration cycle of carbon bed A has been completed, and the carbon bed B is similar. The significance of oil and gas recovery
With the rapid economic development and the rapid increase in car ownership, China's oil energy supply has become increasingly tense, the dependence on foreign crude oil imports are increasing, according to statistics, in 2004 the total domestic crude oil and imported crude oil of about 290 million tons , Of which light imports of crude oil reached 1.2 million tons. But the gasoline in the transport and storage of oil and gas volatile problem has not yet attracted our attention. According to the CARB (California Air Resources Association) on the gas station (no installation of oil and gas recovery unit) testing shows that every 1,000 gallons (2952kg) of gasoline will be 0.84 pounds (0.38kg) of gasoline from the tank through the respiratory loss, Another 8.4 pounds (3.8kg) of gasoline will be in the process of refueling due to evaporation loss. Oil and gas emissions within the tank area is also very large: 1 degree Celsius temperature, gasoline will be discharged 0.21% of the oil and gas, the number of days stored, the tank volume of oil and gas volume ratio greater; if 2 million tons of oil Stored in the utilization of 50% of the oil tank 300 days, the average daily temperature change 10 degrees Celsius, there will be more than 550,000 cubic meters (660 tons) of oil and gas emissions to the atmosphere. Domestic data also show that in 2003 the national consumption of 50 million tons of gasoline in the transport, transfer, marketing process at least 280 million cubic meters (340,000 tons) of oil and gas, oil and gas volatile economic losses of up to 1.3 billion yuan; Statistics, in 2004 China's oil and gas volatilization caused by the economic losses of up to 2 billion yuan.
Oil and gas evaporation will produce a large number of high saturation concentrations of oil and gas, if you encounter Mars or static electricity will explode, which the tank area and gas stations and so brought a great security risk. Now some of the city's gas station began to install the refueling gun to bring back the gas device, although the solution to the car fuel side of the generated oil and gas volatilization problems, but since the extraction of oil and gas have not been recycled, mostly concentrated through the breathing cap re-discharge, So it does not fundamentally eliminate security risks.
The main components of oil and gas are benzene, xylene, ethylbenzene and other hydrocarbons, mostly carcinogens and because most of the gas stations built in urban traffic arteries and other relatively concentrated areas of the population, oil and gas emissions of space height also in people breathing zone Range, therefore, oil and gas harm caused by the human body can not be ignored. Oil and gas after ultraviolet radiation, and other harmful gases in the air a series of photochemical reactions, the formation of more toxic pollutants, and further threat to people's health.
In Europe and the United States, oil and gas recovery in the seventies of last century began to start, and now has formed a more mature oil and gas recovery technology and relatively complete regulatory norms. In 1990 the United States Federal Environmental Protection Agency on the implementation of the revised "Air Protection Law", the provisions of the gas station air quality can not meet regulatory requirements. Oil and gas recovery equipment must be installed. In 2001, CARB (California Air Resources Association) has proposed a more stringent EVR (Enhanced Vapor Recovery) Act, requiring the installation of more advanced oil and gas processing equipment from 2002 to 2006, the mandatory all the Gas stations supporting the installation of oil and gas processing equipment. In China, legislation on oil and gas recovery has also been put on the agenda. 2002, the State General Administration of Quality Supervision and the Ministry of Construction to develop the "car refueling stations design and construction specifications" of the gas station to install oil and gas recovery and leakage detection facilities made clear provisions. August 1, 2007, the State Environmental Protection Department promulgated the implementation of the GB20950-2007 "storage depot air pollutant discharge standards", provides the treatment device oil and gas emissions limit of not more than 25g / m3, processing efficiency of not less than 95%.

The current oil and gas recovery technology from the principle point of view can be divided into four kinds, namely, absorption, condensation, adsorption and membrane separation.

Absorption method
Absorbent method is an absorption liquid which can easily absorb oil and gas, such as petrol (or waste oil), kerosene solvent, light diesel oil and special organic solvent, which are distillated light components under atmospheric pressure or normal pressure and low temperature, Oil and gas spray contact to dissolve the absorption of oil and gas. The treatment effect of the absorption method is greatly affected by the absorbent, and the recovery of the absorbent is usually difficult to reach 80% or more. Absorption method also covers an area of large, is not conducive to the shortcomings of intermittent operation.

Condensation method
Condensing method is the use of refrigerant through the heat exchanger for oil and gas condensation, can be directly recovered oil. Oil and gas through the pre-cooler temperature dropped to 4 ℃ or so, most of the water vapor condensed into water, oil and gas into the first cooler cooling to about -40 ℃, and then into the secondary cooler cooled to about -70 ℃ below , After one or two cooling can make most of the volatile organic compounds condensed into liquid recovery, emissions of oil and gas concentration can reach 35mg / L standard. But because of indirect heat transfer, the refrigerant temperature is very low (-80 ~ -70 ℃) can guarantee a higher recovery rate. Higher levels of cooling of the oil and gas are required if the required hydrocarbon concentration is lower. The safety of the condensing method and the efficiency of oil and gas recovery are higher, but the one-time investment is bigger, and the main disadvantage is that the energy consumption is too high and the running cost is high due to the cooling of oil gas to -80 ~ -70 ℃. .